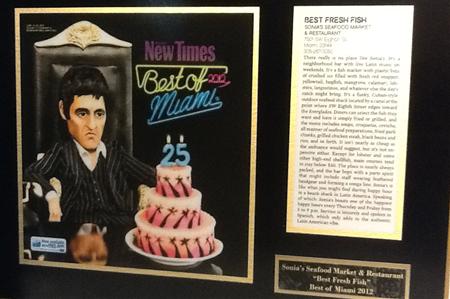 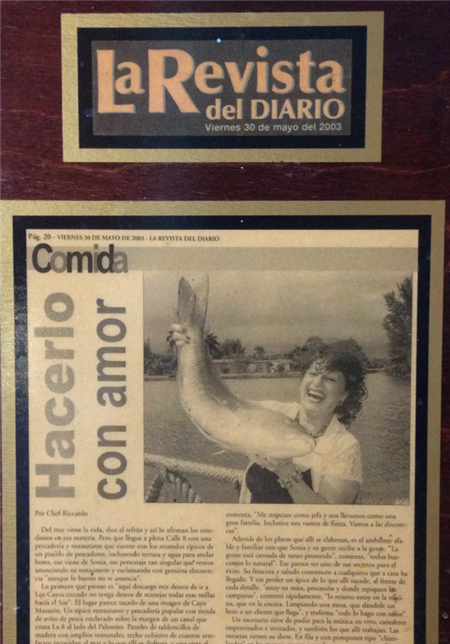 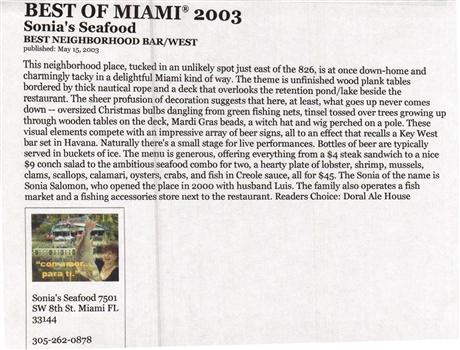 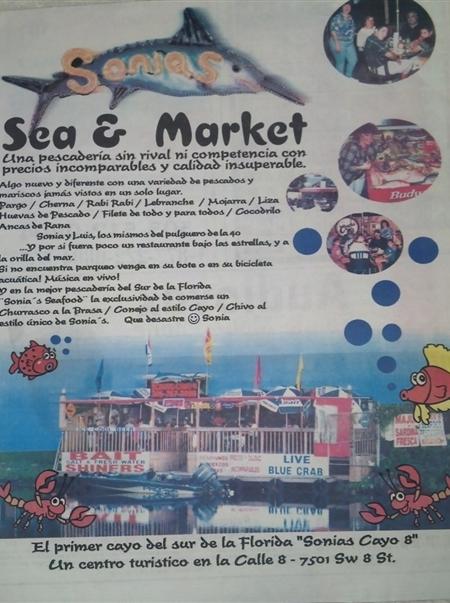 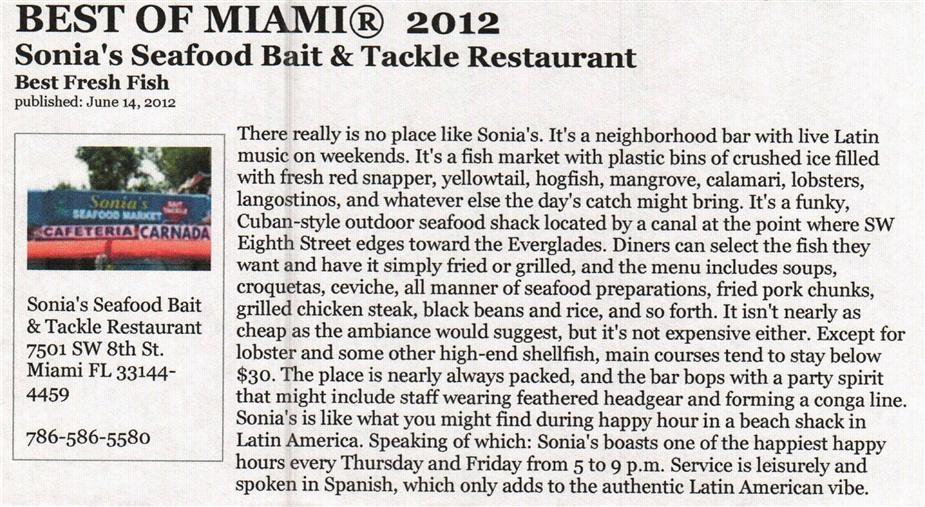 THE BEST OF SONIA'S SEAFOOD MIAMI

We star in the flea market to sell fresh fish and seafood, after they closed we open a restaurant and fish market on 8 st and is been a success, wining on 2003 the Best Neighborhood Bar/West,

This neighborhood place, tucked in an unlikely spot just east of the 826, is at once down-home and charmingly tacky in a delightful Miami kind of way. The theme is unfinished wood plank tables bordered by thick nautical rope and a deck that overlooks the retention pond/lake beside the restaurant. The sheer profusion of decoration suggests that here, at least, what goes up never comes down -- oversized Christmas bulbs dangling from green fishing nets, tinsel tossed over trees growing up through wooden tables on the deck, Mardi Gras beads, a witch hat and wig perched on a pole. These visual elements compete with an impressive array of beer signs, all to an effect that recalls a Key West bar set in Havana. Naturally there's a small stage for live performances. Bottles of beer are typically served in buckets of ice. The menu is generous, offering everything from a $4 steak sandwich to a nice $9 conch salad to the ambitious seafood combo for two, a hearty plate of lobster, shrimp, mussels, clams, scallops, calamari, oysters, crabs, and fish in Creole sauce, all for $45. The Sonia of the name is Sonia Salomon, who opened the place in 2000 with husband Luis. The family also operates a fish market and a fishing accessories store next to the restaurant.

There really is no place like Sonia's. It's a neighborhood bar with live Latin music on weekends. It's a fish market with plastic bins of crushed ice filled with fresh red snapper, yellowtail, hogfish, mangrove, calamari, lobsters, langostinos, and whatever else the day's catch might bring. It's a funky, Cuban-style outdoor seafood shack located by a canal at the point where SW Eighth Street edges toward the Everglades. Diners can select the fish they want and have it simply fried or grilled, and the menu includes soups, croquetas, ceviche, all manner of seafood preparations, fried pork chunks, grilled chicken steak, black beans and rice, and so forth. It isn't nearly as cheap as the ambiance would suggest, but it's not expensive either. Except for lobster and some other high-end shellfish, main courses tend to stay below $30. The place is nearly always packed, and the bar bops with a party spirit that might include staff wearing feathered headgear and forming a conga line. Sonia's is like what you might find during happy hour in a beach shack in Latin America. Speaking of which: Sonia's boasts one of the happiest happy hours every Thursday and Friday from 5 to 9 p.m. Service is leisurely and spoken in Spanish, which only adds to the authentic Latin American vibe

With Jimbo's Place in the wind and the seafood shacks of yore so few and far between, Miami needs a place like Sonia's Seafood Bait & Tackle Restaurant. A fish market, bar, music venue, local's hangout and veritable shack of eccentricities, it's a Flagami mainstay. Diners can pick up fresh catches like red snapper, yellowtail, hogfish, mangrove, calamari, lobsters and langostinos - or sit a spell and get their fish grilled or fried and paired with soups, croquetas, black beans and rice and other classic fare. The atmosphere is lively and festive - particularly during happy hour. Don't be fooled by the divey decor, however, prices aren't rock bottom. Entrees range around $20 to $30, depending on your seafood selection. English speakers will stumble through, as it's all Spanish-speaking, all the time, but "pescado por favor" is simple enough. You want South Florida authenticity - here it is.